The majestic images of two murals on their own libraries, the one at Ciudad Universitaria, with the Puma No. 13 facing the west side: the Central Library of the National Autonomous University of Mexico, then we got the TD Jesus mural facing the Notre Dame Stadium: the Hesburgh Library.

In Mexico City the UDLAP Aztecas, like Lord Pakal, were descending on the University Olympic Stadium gridiron to face the University of Mexico Pumas CU. The first time since 2017 when the Aztecs won 27-21 in a thrilling game. Then 7 hours later on the same mythological roads we’re touching the Irish spirit. The Golden Dome transforms into the shimmering gold of Las Vegas. The Fighting Irish are ready to face #16 BYU tonight at the Allegiant Stadium.

The Pumas, led by quarterback #3 Leonardo Garza Peña Villamil had their offense running wild in Copilco. Pumas switched QBs and reached out the Aztlán, the promised zone, thanks to a carry by QB #12, Félix Eduardo Rivera Garaygordobil. Pumas with the lead 6-0 in the 1st quarter.

Like sacrificial rites, the Pumas defense took the Aztecas prisoners, Cholula was not any more the scariest sacred football site and time was required to heal, the temple, the pain.

Family is everything, a football family is valued in the U.S. and in Mexico, Angel Rubio played in the NFL, Isaiah Rubio is on his way to college football and tonight his brother Gabriel Rubio is ready to take the field, we saw him playing vs Cal, mainly in the red zone, today he is ready for the battle, all those years dreaming to finally being fully involved in a college football game, he painted his face as Golden Tezcatlipoca in the festivities of Xólotl. He is ready to fight in an electrified Allegiant Stadium.

Back at the Estadio Olímpico Universitario it was the third quarter when the blue and gold team scored another TD, this time when Mario Medrano Silva executed a reverse play that ended bringing the ball to the end zone. Leonardo Garza Peña Villamil, found Patricio Alberto Olvera Benítez in the Aztlán zone. Sergio Robles made the extra good and the Pumas were up by three touchdowns. PUMAS CU 20 AZTECAS 0 (3rd Q).

It was kickoff time in Las Vegas. The opportunity finally came at full speed for Gabriel Rubio (97) who showed strength by filling the ‘A’ gaps in the red zone. However the Cougars were confident and on that drive Brigham Young’s QB, Jaren Hall threw a 2-yard pass to Kody Epps for a touchdown for the Cougs.  The Irish offense comes back, Pyne throws a pass to Michael Mayer, with this TD catch the powerful #87 is now the all-time leader in receptions for tight ends for the Irish. Notre Dame 10 – B.Y.U. 6 (2Q)

On 3rd and 3 in Cougar territory, Drew Pyne throws a 30-yard pass to Jayden Thomas for the Irish 2nd touchdown. The offensive line is blasting defenders, these soldiers are giving all the time to their QB, standing strong. The Irish offense was generating yards, describing precise routes to get the ball into the endzone. With his 2nd TD of the night Michael Mayer sets the Fighting Irish record for receptions by a tight end in a game with 10. Notre Dame 25 BYU 13 (3rd Q)

The Irish defense is hitting hard. Just like the Irish, the Pumas were sacking, they were truly beasts like never seen before. Pumas defense in seven times took the Cholulteca QB’s to eat grass, and Óscar Patricio Muñoz had a pick. The Aztecas were limited on the ball game court, getting only 167 total yards. Before the Pumas were heading to the Temazcal, Patrick Ibarreche (17) threw a 25-yard pass to Pablo Pacheco for the one and only TD for the Aztecas.

Later at night the Irish were tackling with no mercy, this group of savage warriors were on the way to achieve greatness in the Shamrock Series. Jayson Ademilola (57) had one sack and so did Prince Collie (10).

After an erratic start, the Pumas offense finally had their clubs and shields to destroy the Aztec defense. Raúl Reyes Nuncio was then the QB for the Pumas, he handed the ball to Esteban Espinosa Flores (11), who heroically escaped through the middle, running 50 yards and reaching the Aztlán for the last time in the afternoon. The Pumas QB Leonardo Garza played hard throwing the ball. The Golden Horde had 185 passing yards.

With 3 TD passes from Drew Pyne, a majestic performance from the offensive line, protecting and opening the gaps to record an impressive 234 rushing yards, the Fighting Irish hit No. 16 BYU.  Audric Estime finished with 110 total yards from scrimmage, the second consecutive game he has reached that mark. It was the first victory over a ranked opponent for Coach Marcus Freeman.

Michael Mayer posted 11 receptions, the most for any FBS tight end this season. With those catches he surpassed Tyler Eifert (2009-12) for the most receptions by a Notre Dame tight end. He broke the record on an epic 24-yard touchdown catch.

Gabriel Rubio was a beast and recorded 2 tackles, this is proof that if you keep grinding and practicing hard then you get the opportunity to play on the gridiron. Rubio was defiant, he was an Aztec Jaguar Knight, great skill set shown by pushing the Cougars offensive guards, selling high his pride, and this is how they went hard on the team ranked as #15 in the country. Great win for the Irish in front of a sold out crowd of 62,742, a new Allegiant Stadium college football attendance record, surpassing the 56,511 number from the 2021 Pac-12 Championship.

It was an university sensational lecture of glory, the Pumas sacrificed the Aztecas. The strategy was played well when it was needed in Mexico City and Las Vegas. Pumas face the Águilas Blancas next week at Estadio Olímpico Universitario. The Irish host the Stanford Cardinal. Both teams share the passion for the Golden vs Maroon games ahead of them and their common stories will never go away. 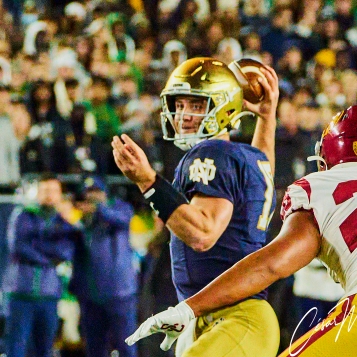 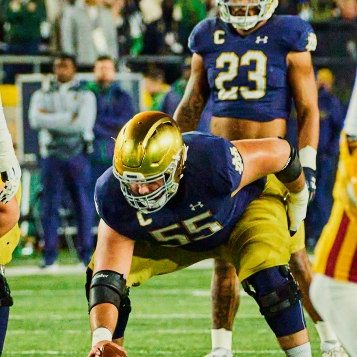 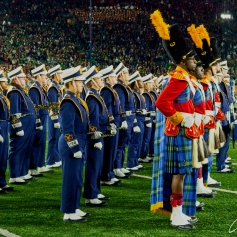 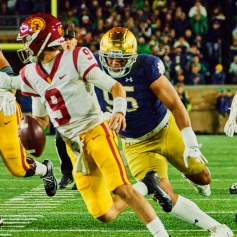 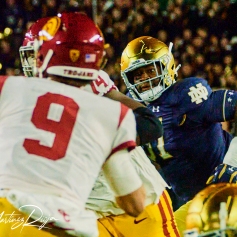 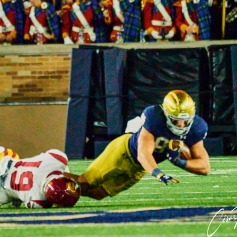 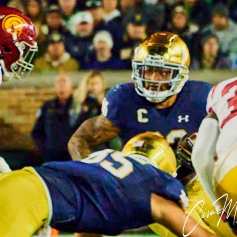 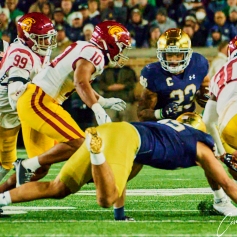 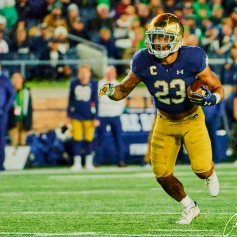 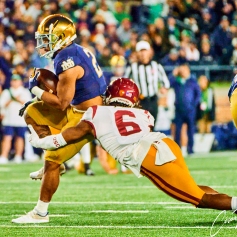 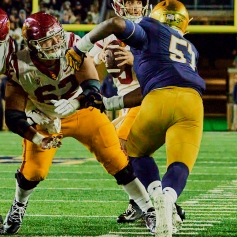 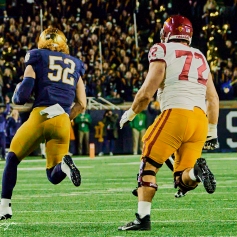 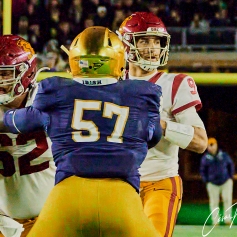